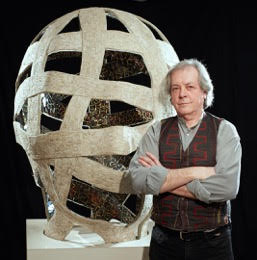 Marco Bravura was born in 1949 in Ravenna. He lives and works between Moscow and Ravenna.

He graduated from the Institute of Mosaic Art G. Severini in Ravenna and then moved to Venice, where he studied at the Fine Arts Academy. After many years spent traveling around various parts of the world, in the eighties Marco settled again in Ravenna, where he opened his own atelier. The importance of the genius loci as a fundamental expression of a subjective identity, and as a strong testimony of one’s own homeland has been repeatedly underlined by many art critics: in Ravenna the genius loci is definitely the mosaic tradition, leading Marco to focus his artistic production on this medium. He fully maximized these origins, combining them with the countless “tesserae” he had collected in his personal world’s discovery.

Bravura’s works have been acquired by various institutions, museums, banking houses and private collections in Europe, Russia and the United States of America. His works have been featured in exhibitions in Italy and abroad, including the Venice Art Biennial 2011, and the IV Moscow Biennial. Under his supervision the Institute Artistique Antonin in Beirut, Lebanon, has been created in cooperation with Ravenna Municipality, the CPFP and the Pere Antonin. He has created the mosaic works of the Ravenna Festival award and of the Giustiniano award for Art and Culture.

Something to Say? Cancel Reply